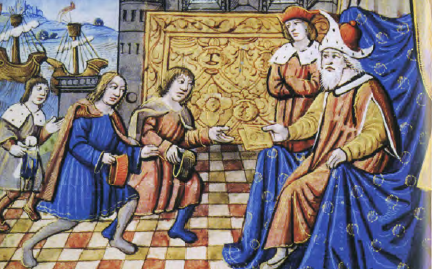 In Xanadu did Kubla Khan
A stately pleasure-dome decree:
Where Alph, the sacred river, ran
Through caverns measureless to man
Down to a sunless sea.
So twice five miles of fertile ground
With walls and towers were girdled round;
And there were gardens bright with sinuous rills,
Where blossomed many an incense-bearing tree;
And here were forests ancient as the hills,
Enfolding sunny spots of greenery.

But oh! that deep romantic chasm which slanted
Down the green hill athwart a cedarn cover!
A savage place! as holy and enchanted
As e’er beneath a waning moon was haunted
By woman wailing for her demon-lover!
And from this chasm, with ceaseless turmoil seething,
As if this earth in fast thick pants were breathing,
A mighty fountain momently was forced:
Amid whose swift half-intermitted burst
Huge fragments vaulted like rebounding hail,
Or chaffy grain beneath the thresher’s flail:
And mid these dancing rocks at once and ever
It flung up momently the sacred river.
Five miles meandering with a mazy motion
Through wood and dale the sacred river ran,
Then reached the caverns measureless to man,
And sank in tumult to a lifeless ocean;
And ’mid this tumult Kubla heard from far
Ancestral voices prophesying war!
The shadow of the dome of pleasure
Floated midway on the waves;
Where was heard the mingled measure
From the fountain and the caves.
It was a miracle of rare device,
A sunny pleasure-dome with caves of ice!

A damsel with a dulcimer
In a vision once I saw:
It was an Abyssinian maid
And on her dulcimer she played,
Singing of Mount Abora.
Could I revive within me
Her symphony and song,
To such a deep delight ’twould win me,
That with music loud and long,
I would build that dome in air,
That sunny dome! those caves of ice!
And all who heard should see them there,
And all should cry, Beware! Beware!
His flashing eyes, his floating hair!
Weave a circle round him thrice,
And close your eyes with holy dread
For he on honey-dew hath fed,
And drunk the milk of Paradise.–Samuel Taylor Coleridge

Kublai Khan (1215-1294) was the grandson of Genghis, the “Great Khan,” and ruled the Mongol empire from 1260-1294.  Today, he is recognized as the founder of China’s Yuan dynasty, and as the great unifier of what is now China and as its integrator into that same Mongol empire.  Unfortunately his leadership talents (which were considerable) were not inherited by his successors, and by the middle of the fourteenth century, the Mongols had withdrawn from the majority of his conquered territory, and China went its own way from that point forward.

Samuel Taylor Coleridge died 187 years ago, on July 25, 1834.  He had achieved the great age–for an English Romantic poet–of sixty-one years, during which he’d written some beautiful stuff.  Kubla Khan is, I think, my favorite.  (OK, maybe because it’s the piece of his that reminds me most of my all-time favorite English poet, John Keats.  I’ll cop to that.)  I only wish that we had more than a “fragment” to luxuriate in.

I’ve always loved Coleridge’s explanation of why he never finished the poem (which was written in 1797 and which he says came to him in a dream), in which he does a “Bob Dole,” and writes about himself in the third person:

On awakening he appeared to himself to have a distinct recollection of the whole, and taking his pen, ink, and paper, instantly and eagerly wrote down the lines that are here preserved. At this moment he was unfortunately called out by a person on business from Porlock, and detained by him above an hour, and on his return to his room, found, to his no small surprise and mortification, that though he still retained some vague and dim recollection of the general purport of the vision, yet, with the exception of some eight or ten scattered lines and images, all the rest had passed away like the images on the surface of a stream into which a stone has been cast, but, alas! without the after restoration of the latter!

Who among us has not, at one point or another in his or her life, been interrupted in the production of a simply magnificent magnum opus by the annoying “Person from Porlock”** who shows up uninvited, and perhaps even unwelcome, to wreak havoc in our lives?

What great work would you have completed, and how much better off would the world be, had you never been similarly interrupted in your own life, by an interfering buffoon?

**A village in Somerset, England with an interesting history of its own.

1 thought on ““A damsel with a dulcimer””