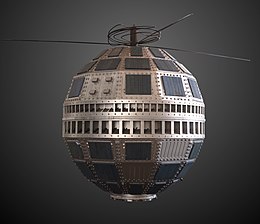 Today, July 10, 2021, is the fifty-ninth anniversary of the launching of Telstar 1, a 170lb communications satellite launched for the purpose of receiving ground signals and re-transmitting them back to earth.  According to britannica.com:

Following Telstar’s launch on July 10, 1962, a giant movable horn antenna near Andover, Maine, locked onto the satellite when its shifting orbit (apogee 5,600 km [3,500 miles]) reached an appropriate point. Minutes later the first television pictures were transmitted across the Atlantic Ocean and received, via relay stations in England and France, on European television screens. Telephone, telegraph, data, telephoto, and facsimile transmissions were also successfully made.

So much that we take for granted these days.  And yet, at the time, it was almost miraculous and portended a future of instantaneous communication, where no part of the world was disadvantaged by remoteness, and no person was out-of-touch.  (Here at the end of the first quarter of the twenty-first century, it’s possible to look back from a “careful what you wish for” perspective, but at the time we had no such thoughts.  The world was our oyster, science was progress, and we believed.)

Still, and all, what I remember most about Telstar (I was almost eight years old when it was launched) isn’t the technology: It’s the music.

Telstar was a British instrumental recording written and produced by Joe Meek (a pioneer and genius of early ‘pop’ sound engineering and electronic composition/recording), and performed by the English band The Tornados.  It was released on August 17, 1962–a little over a month after the satellite was launched–and has the distinction of being the first recording by a British band to chart at #1 in the United States.

The weirdly electronic-sounding music (played on early electronic keyboard synthesizers) was not without controversy, as a French composer accused Meek of plagiarism, a case that wasn’t resolved (in Meek’s favor) until several weeks after his suicide in 1967.  By then, Meek, a deeply troubled man, had set up what he believed were communications with the dead, and had succumbed to long-term depression, bipolar disorder, and schizophrenia.

But once again, we knew none of that at the time.

Here’s Telstar. One of the few contemporary (45rpm) pop records we owned, and the opening bars of which catapult me back to childhood–and a simpler world–every time I hear them: