She’s the ultimate femme fatale. And it’s one of the oldest stories in the world. The Beautiful Lady Without Pity. (No, for those of you with only rudimentary French, the title doesn’t mean The Beautiful Lady Who Never Says Thank You.) The subject of my second-favorite poem by John Keats, which was written in 1819, when Keats was just 23.

It’s his reworking of a 15th-century French poem of 800 lines, telling a complex story of love and loss. Keats throws out all the extraneous characters and globetrotting excesses of the original, boiling it down to a 48-line tale of one bewitched Knight, one beautiful Lady (without pity) and one withery, sedgy marsh where our bewildered hero is dumped by the Lady, after a night of what one hopes (for his sake, considering how things go for him from there) was unforgettable ecstasy in her “Elfin grot.”

There’s also a neutral observer who kicks things off in the first three stanzas by asking the poor guy why he’s wandering around, alone and in such a funk, wearing a (probably metaphorical) bunch of flowers on his head. The rest of the poem is taken up by the Knight’s response.

It’s a poem about becoming caught up in obsessions of one kind or another, and a warning of the unpleasant end that will come from giving in to them and only realizing it much too late–in our Knight’s case, Winter is on its way (“the squirrel’s granary is full”), and, inside and outside, he’s lost and alone in the dreary and cold weeds. Oh, dear. It’s probably not going to end well for him. Just as it didn’t end well for all the other “pale kings and princes” who’d been enthralled by the Lady. “Tale as old as time.” As they say.

As with all of Keats’ poetry, so much of which focused on love and death, La Belle Dame Sans Merci quickly became a favorite subject of the Pre-Raphaelites. The paintings, although very beautiful, are much of a sameness (or so it seems to me), and anyway, I’m kind of partial to the 1920 Punch cartoon at the start of this post. (Click to embiggen the image if you can’t see the detail; the Lady is applying her war paint while admiring her reflection in the Knight’s shiny plackart. I love the bemused expression on Sir’s face, as well as his Don Quixote-like aspect, broken-down steed and all.)

As for the poem itself, it’s pure Keats. And so, it’s just lovely.

O what can ail thee, knight-at-arms,
Alone and palely loitering?
The sedge has withered from the lake,
And no birds sing!

O what can ail thee, knight-at-arms,
So haggard and so woe-begone?
The squirrel’s granary is full,
And the harvest’s done.

I see a lily on thy brow,
With anguish moist and fever-dew,
And on thy cheeks a fading rose
Fast withereth too.

I met a lady in the meads,
Full beautiful, a fairy’s child;
Her hair was long, her foot was light,
And her eyes were wild.

I made a garland for her head,
And bracelets too, and fragrant zone;
She looked at me as she did love,
And made sweet moan.

I set her on my pacing steed,
And nothing else saw all day long,
For sidelong would she bend, and sing
A faery’s song.

She found me roots of relish sweet,
And honey wild, and manna-dew,
And sure in language strange she said—
‘I love thee true’.

She took me to her Elfin grot,
And there she wept and sighed full sore,
And there I shut her wild, wild eyes
With kisses four.

And there she lullèd me asleep,
And there I dreamed—Ah! woe betide!—
The latest dream I ever dreamt
On the cold hill side.

I saw pale kings and princes too,
Pale warriors, death-pale were they all;
They cried—‘La Belle Dame sans Merci
Hath thee in thrall!’

I saw their starved lips in the gloam,
With horrid warning gapèd wide,
And I awoke and found me here,
On the cold hill’s side.

And this is why I sojourn here,
Alone and palely loitering,
Though the sedge is withered from the lake,
And no birds sing.

John Keats died at the age of only 25, in Rome February 23, 1821. His legacy is some of the most beautiful poetry ever written. 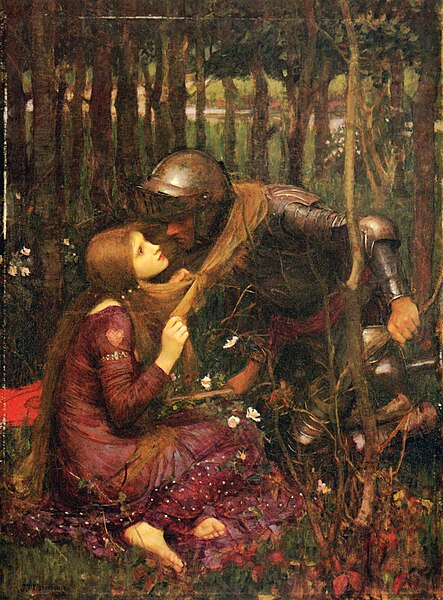