I had my last conversation with Granny (my mother’s mother) not too long before she died. She was in her mid-eighties at the time, almost bedridden from the arthritis that had plagued her for decades, and mentally, she was getting a little bit woolly. The past, though, was still clear in her mind, and she spent much of her last days there. And so I heard this story for the first time.

Before I get started (it couldn’t just be that easy, right? This is me after all), you should know that Granny and Grandpa were married in April, 1926. The groom was handsomely attired in morning suit and top hat, and I’ve always thought the bride looked to be glowing with happiness (don’t ask me what that thing is she has on her head. I’m guessing a silk cap adorned with lace). Knowing Granny, I am sure the flowers were absolutely lovely.  According to any and all photographic evidence, the bride’s mother (my great-grandmother) did not attend.  Elderly family relatives who, while they were still alive, were quizzed about this possibility, evaded the question entirely, or claimed not to know–even one of the bridesmaids, who was my grandmother’s first cousin and who died at the age of 102, in 2015.  So, probably a story there somewhere.  Knowing the players, that wouldn’t surprise me at all.

Granny and Grandpa lived most of their life at “104,” their rambling home in Handsworth Wood in Birmingham, and seemed content and at peace with themselves and the world. And yet, they were prone to verbal spats, and then there was always that picture hanging on the kitchen wall, covering up the dent underneath–the result, family legend has it, of Grandpa once throwing the blue enamel teapot at his bride. Every year, without fail, until it became physically too difficult, they would pile into the family car (the 1947 Rover, license plate GOV 141) and head down to Cornwall for a week, a trip of about 250 miles which never took less than twelve hours to accomplish.

I probably benefited from my position as the oldest, and for several years, the only grandchild. Both grandparents adored chocolate, Granny keeping hers in the top right-hand drawer of the dresser by her bed (mostly Cadburys, the homegrown favorite), and Grandpa keeping his (little bags full of chocolate buttons) in his pockets. So I could always be sure of a handout there, as I found at Granny and Grandpa’s some of the stability and sense of belonging that wasn’t always front-and-center during my peripatetic and exciting, but often quite disrupted, early childhood.

So, there I was with Granny, not long before she died in 1988. By that time, she’d been widowed for fifteen years, and had stayed on at 104, in a house that was far too big for her and in which it was becoming increasingly difficult to move around. “I’m not moving,” she’d insist. “They’ll have to carry me out feet first.” And they did. A very determined lady in her old age, my granny, once she got the bit between her teeth. I’m imagining your surprise.

At some point in our desultory conversation, Granny looked at me and said, “I almost got married to someone else, you know. Not your grandpa.”

“I loved him very much,” she said. “But he was two inches shorter than me. My mother said I could never marry a man who was shorter than I was. So she made me give him up.”

(Stipulate here that my aforementioned great-grandmother could have given Violet, the Dowager Countess, a run for her money any day of the week, so it’s not surprising she prevailed over her daughter’s intentions.  Sad though, if after putting her foot down and forcing her daughter to give vertically challenged love-interest #1 the heave-ho in favor of Grandpa, she still couldn’t bestir herself to attend the wedding.)

After (what was for her) an instance of pouring her heart out, Granny paused for a few seconds, looked at me again, and said

“That was very foolish of me. I shouldn’t have listened to her. It didn’t matter that he was shorter than me. I should have just run off with him. Who can give a law to love?”*

My poor Granny. A hard lesson learned, and one that, as far as I know, she never told another soul about in her life.

*I don’t know if Granny knew she was channeling Anicius Manlius Severinus Boëthius, the ancient Roman politician and philosopher when she said that, but in his Consolation of Philosophy (which he wrote in 524AD while he was in jail awaiting execution for his part in an  alleged plot to overthrow King Theodoric the Great, Boëthius says (as it’s usually translated), “Who can give a law to lovers?  Love is unto itself a higher law.”

The quote occurs in one of the book’s “songs.” (they’re really poems, interspersed throughout out the text), this one written about the mythological husband and wife team of Orpheus and Eurydice.  It deals with Orpheus’s attempts to bring his dead sweetheart back from the Underworld, and his eventual descent there himself in order to try to retrieve her.  He strikes a deal with the Hades, King of the Underworld, that Eurydice may return to life on earth with him, but only if, as they journey out of the Underworld, Orpheus does not look back at her before they have both passed through its gates.  Orpheus believes he’s quite capable of complying with this order, but on the way out, he becomes concerned when he cannot hear his wife footsteps behind him, and he starts to wonder if the gods have betrayed him.  Impatient, much in love with his wife, desperate to see that she actually is coming with him, and in anticipation of the wonderful life they’ll have together if he succeeds in his mission, he sneaks a look back.  And there she is!  But he’s broken the pledge he made to Hades, and Eurydice is dragged back to the Underworld, never to be seen in this life again.  Orpheus’s life, from that point on, isn’t any picnic either.

Boëthius is clearly sympathetic to the lovers, and wishful that the “higher law” of love were not subject to the arbitrary and sometimes capricious whim of external laws and other forces. (Dr. Johnson said that the sure knowledge that one will be hanged in a fortnight “concentrates the mind wonderfully,” and certainly Boëthius (who was a Christian) spent his last days and weeks concentrating, meditating, pondering, and writing about many virtues, than which there are few more important than love, no matter how it takes us or who it involves.)  All that matters, if the love is real and lasting, is that we show it, stay true to it, and don’t betray it–regardless (or irregardless, as the case may be), of superficial differences between us such as those of height, weight, age and background.  I wish Granny had found that out sooner than she did. 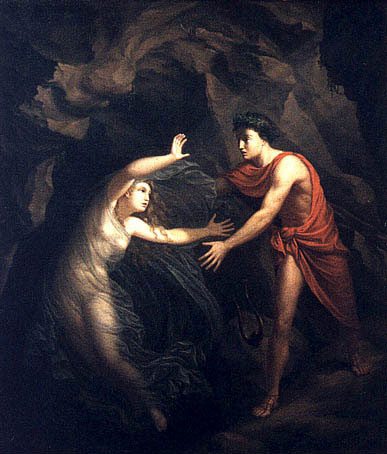