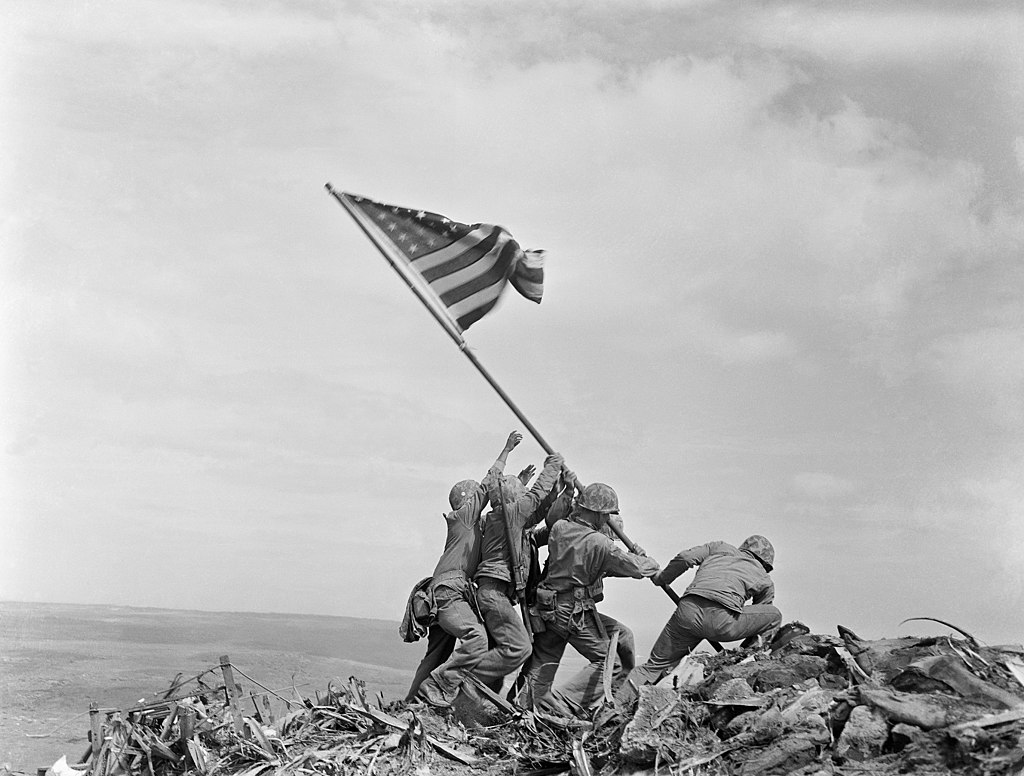 From an article commemorating the seventy-fifth anniversary:

Pfc. Jacklyn Lucas, 17, of Plymouth, N.C., was surprised when he suddenly saw two enemy grenades at his feet. He forced them into the sand with his rifle butt and his hands, and covered them with his body. He didn’t even have the chance to shut his eyes, he wrote later.

Only one grenade went off. It blew him sky high. But he lived to be 80 and was also given the Medal of Honor.

The battle went on long after the flag was raised on Suribachi. It devoured Marines and Japanese soldiers alike. They fought over places on the island called the “Meat Grinder,” “Death Valley,” and “Bloody Gorge.” The terrain was littered with smashed banyan trees, blasted rock and mechanical and human wreckage.

At night the scene was illuminated by star shells.

War correspondent Robert Sherrod said he had never seen so many dismembered soldiers. “Nowhere in the Pacific war have I seen such mangled bodies,” he wrote in Life magazine. “Many were cut squarely in half. Legs and arms lay 50 feet away from any body.”

In one case a Marine’s severed foot was recovered still in its boot. The serial number on the boot was noted and the foot was buried in a formal grave, according to author Richard F. Newcomb’s classic account of the battle. Later, the owner of the foot was found alive in a hospital in Saipan.

It’s an anniversary my Marine, Mr. She, never failed to observe, because he remembered it. (He was slightly less than seven years old at the time. Lord, I loved to listen to him talk about his memories of World War II on the Home Front and through the eyes of a child. So different from those of my own–British–family. Victory Gardens. Aunt Sophie–a real life Rosie the Riveter in Pittsburgh. His father–a devout and destructive alcoholic. And the best welder Jones and Laughlin Steel Corporation ever had. And more.)

Here dead we lie
Because we did not choose
To live and shame the land
From which we sprung.

Life, to be sure,
Is nothing much to lose,
But young men think it is,
And we were young–A.E. Houseman